From The Blackout Club Wiki
Jump to: navigation, search
Acoustic Mine 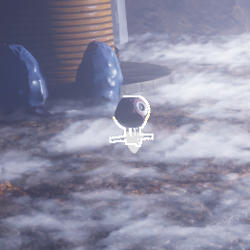 Information
Type
Trap, Alarm
Features
Makes noise when detecting a kid's presence in it's vicinity for too long

The Acoustic Mine is an environmental hazard found in missions.

Acoustic Mines can only be disarmed by throwing a Foam Grenade at it, which will disable the trap for the rest of the match, or by shooting a Tranquilizer Dart with a Crossbow at it, which will cause it to malfunction and 'pop' (which causes noise and sin). The Acoustic Mine can also be temporarily disabled by throwing a Flash Bang at it, but it will reboot after a moment.

If one has the Hacker Major Power's third upgrade, Remote Disarm, they can use it to temporarily disarm the trap from a safe distance and allow safe passage. A number above the trap can indicate how long the trap will be disabled before reactivating. One can safely avoid activating the Acoustic Mine by running quickly past it (the trap will only say 'Warning!', but will not activate). Additionally firing a dart from a Drone can also disable the trap, functioning similar to a Crossbow. A player can also use their Drone to investigate the area beyond the trap without getting close to it, but flying a drone closely above the trap will also trigger it, so the player must keep their Drone a certain distance away from the trap. Alternatively, with no cost to consumable items, flying the Drone directly into the trap will also disable it permanently, though at the cost of breaking the Drone, meaning that it must be picked up and repaired.

Both Sleepers and Lucids are known to place these traps, sometimes where they have heard and/or seen kids been. When they put these acoustic traps down, they will stay in that area until the same Sleeper or Lucid places another trap, which will despawn the previous one they had placed.