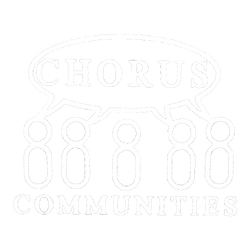 CHORUS Communities is an organization located within Redacre.

CHORUS communities, also known as CHORUS, is an influential organization based in the town of Redacre. Their logo consists of a group of five people saying 'CHORUS' in a speech bubble. On the surface, "CHORUS is the housing association which arranged the internet- & cellular-free community of Redacre".[1] The full extent of Chorus' actions are unknown, but their influence can be uncovered in almost every institution in Redacre. The Blackout Club suspects CHORUS to be at least partially responsible for many of the strange happenings in the town. The kids regard CHORUS as an enemy, some even fearing that they will cause harm and even death to those who do wrong in their eyes. The missing posters bear CHORUS' logo.

CHORUS manages the efforts SPEAK-AS-ONE uses to stay hidden from both the world outside Redacre and the Residents of Redacre as well. They operate with a wide variety of methods. From what is known of the population of Redacre, [2] all Lucids may be members, but it is likely most members of CHORUS run operations are normal residents unaware of the true nature of the organization. Very little is known of CHORUS' internal structure or members.

CHORUS' public face is a mix of charitable and progressive, if strictly adherent to Redacre's aversion to external technology. They run co-housing programs, advertising Redacre to people worldwide [3], and manage all housing spaces in town.[4][5] When welcoming in new residents, CHORUS replaces all electronics with a cellular chip free of charge, even including smartphones.[6][7] The phones used by the Blackout Club bear the CHORUS logo. In addition to providing their own local cell service, their name shows up on utility panels in houses. CHORUS provides excellent medical coverage, [8] including covering pregnancy related insurance claims [9] and gender affirming care of transgender members.[10] There have been mentions of CHORUS taking in the homeless.[citation needed] Chorus also runs the Old Growth Daycare Center, "an award-winning comprehensive daycare program designed to cater to Redacre's unique cultural balance. The staff are committed to helping Redacre's young minds to develop life-long skills without the influence of cellular age." Holiday events, such as Trick-or-Treating are held at the center. When adoption routes are not fruitful, CHORUS takes up full time care of children at such centers.[11][12]

CHORUS' hidden face reveals a dark streak of ends-justify-the-means measures and controlling actions. CHORUS is responsible for keeping Redacre looking boring and ordinary,[13] while primarily functioning for SPEAK-AS-ONE's goals. Every aspect of life in Redacre is strictly tracked, as evident in the overwhelming number of monitors in rooms such as the Signal Relay, Subliminal Media, or the secret rooms of the Old Growth Daycare Center. Residents are spied on with CHORUS going so far as to collect keys, IDs, notes on personal habits, and even DNA samples from some.[14] Residents' computers are monitored for "seditious terms", words relating to the other The Voices.[15] The borders are strictly watched, and tourism is usually only permitted as a prelude to an invitation to move to Redacre.[16] The housing programs allow in only those who have shown to have unity promoting minds, [3] and residents are only allowed to lease houses.[17] CHORUS holds the monopoly on cell service, and as seen in the Prologue when Bells attempts to call her parents, this service is unreliable and means residents are unable to make calls outside of town.[1] This unreliability is likely engineered intentionally. While external companies are allowed to do business in Redacre, they are heavily vetted to stop unconditioned strangers from entering town. Tactics of situational compromise are used as camouflage to keep Redacre's secrets hidden.[18] Deals are managed both internally and externally by SPEAK-AS-ONE Hosts embedded in government agencies to ensure Redacre is overlooked as a quiet community.[19] Regarding family, CHORUS strongly prefers adoption when possible but very rarely allows some forms of artificial insemination.[20] When CHORUS found Nayeli did not use their provided sample, Nayeli feared CHORUS would not honor the insurance claims and might go so far so to force the family to leave Redacre due to housing space conflicts.[21] [22] The medical care is thus another route of control over the residents. In one strange instance, a CHORUS-run hospice facility used patients for unknown purposes.[23] 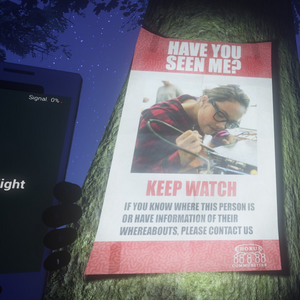 Though SPEAK-AS-ONE founded Redacre, it is unknown when CHORUS itself became a public institution. Also unknown is if their efforts were a continuation of the actions SPEAK-AS-ONE previously asked of their followers, or new altogether. CHORUS' known acts have thus far been focused on and in Redacre's development and upkeep.

CHORUS was responsible for executing the Great Cull against THEE-I-DARE, handling the legal cover-ups, disposal of his Hosts' bodies, and finding new tenants for the houses left empty by the murders.[citation needed]

All Bonus Evidence items found during Missions are CHORUS-related objects (briefcases, suitcases, posters, etc.). When under the Gorgon curse, all Sleepers, Lucids, and The Shape are referred to as part of "The Chorus".

SPEAK-AS-ONE, when warned of the growing presence of HUNT-THE-STRONG in Redacre, commented they would enact another great cull, likely again carried out by CHORUS members.[24]

Lucids will sometimes idly mention that they are watching the borders, the result of the unprecedented total lockdown enacted after Isabela Madi-Shaw went missing. [25]