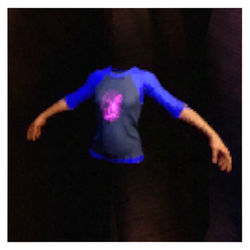 The Chosen Shirt is a special item that can be earned in some interactions with a Voice during a mission.

The Chosen Shirt is a blue and grey shirt with a glowing thumbprint-like mark on the front and the glowing word "CHOSEN" on the back. The colors change in sync with the Halo and can be equipped in the Wardrobe in the Tops category.

Chosen Shirts are awarded to players who are slated to become the Hosts of a particular Voice. They can be granted directly after an interaction with a Voice or at a later time. Players have also received Chosen Shirts without having met their particular Voice before. Players are often made a Chosen to one Voice. Some players have been considered Chosen to two Voices, but this is quite rare. Players can lose their Chosen status with a Voice but will keep the Chosen Shirt in their wardrobe.

Despite its emanating glow, the Chosen Shirt is not visible to Lucids or The Shape. Players can wear the Chosen Shirt without fear that it will compromise their ability to remain hidden from AI; Stalkers will still be able to see the glow.