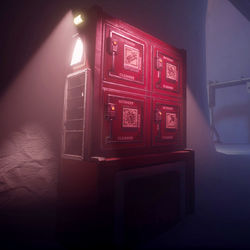 Contraband lockers are items players can utilize to purchase important field items while in the guts of the Maze with their collection of Snacks. The Contraband Lockers are tall structures made from red and gray metal. Four lockers exist on the front containing four types of field items with the items' icons. Around each item's icon are the words "CLEANSE PURGE ABSOLVE"; these are the same words found on trash pile mats though the word "DISPOSE" is missing. On one side of the Contraband Locker is a pad of paper held up by two metal rings with various slots underneath; the opposite side has what appears to be a mailbox.

Though not for their intended use, Contraband Lockers are climbable and can also be used to access higher elevations by climbing on top of the locker, particularly in areas like Film Archives or String Relay B.

Only one player needs to trade snacks to make the item accessible to all players in the mission. Each club member in the mission will be able to acquire the unlocked item even if they did not purchase it. Upon approaching the Contraband Locker, the player will see their current snack total and the trade value of the item.

Players can acquire the following items from each Contraband Locker: