From The Blackout Club Wiki
(Redirected from Dreams)
Jump to: navigation, search

Recalled Dreams is a feature in The Blackout Club (game). 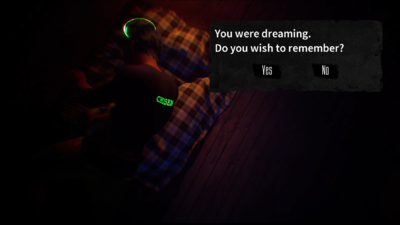 A player being asked if they wish to recall their dream.

Players are sometimes asked when returning to the Hideout after completing a mission if they would like to recall a dream before waking up in ritual space. These dreams comprise of two parts: first a question/remark, followed by a reply.

The first half of the dream is a player speaking. What is heard is this player's ritual submitted at the mirror in the Hideout with a Light of Rebellion. Not every ritual performed is heard as a dream, only the rituals that have been responded to by one of the Voices will be heard as a dream. Players direct which Voice they wish to receive their ritual, but it is possible any Voice could respond to it. The Voices have been known to respond to rituals weeks, even months old; some rituals performed in the beta (August-October 2018) were not responded to until November or later. Voices responding to a ritual intended for another Voice commonly occurs when a new Voice is being introduced. This Voice is not listed when sending a ritual or sacrificing, but will selectively respond to rituals. Eventually, this is also how the Voice introduces themselves to players as well. The most recent Voices to do this were THE-MEASURE-CUTS and DIE-FOR-YOU, who responded to rituals for several months before revealing their names. HUNT-THE-STRONG has been responding to rituals since the beginning of recalled dreams, but before knowing his name he was referred to as "Unknown Hunter Voice" by the game and he responded to the first recalled dream players heard during the Closed Beta and Early Access.

Every Voice has been heard in at least a few dreams, including THEE-I-DARE (despite being fragmented) and SPEAK-AS-ONE.

Players do not need to opt in to Enhanced Horror to listen to dreams.