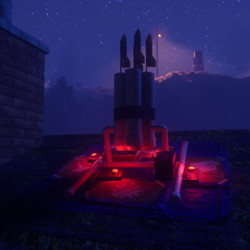 TBC members requesting an item from a Firework Station where it is then air-dropped to them with a second firework.

Only one player needs to trade snacks to make the item accessible to all players in the mission. Each club member in the mission will be able to acquire the delivered item even if they did not purchase it. Upon approaching the Firework Station, the player will see their current snack total and the trade value of the item. Players can acquire the following items from each Firework Station: