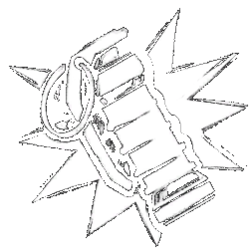 The Flash Bang is one of the Field Items found in missions.

A relatively harmless grenade which flash momentarily activates all photoreceptor cells in the eye, making vision impossible for a few seconds until the eye restores itself to its normal, unstimulated state. An afterimage will also be visible for a considerable time, impairing the victim's ability to aim with precision. Like all Field Items they spawn in supply crates scattered around the map. They can also be bought at Firework Stations and Contraband Lockers for 30 snacks.

Flash Bangs can also be used as Escape Items once grabbed by a Sleeper or Lucid. The moment a teammate is grabbed by the Shape, teammates can throw a Flash Bang directly at the shape to get them to drop the grabbed teammate.