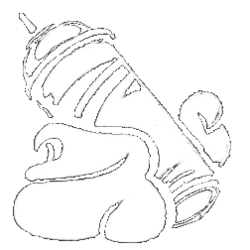 The Foam Grenade is one of the Field Items found in missions.

A canister filled with foamy soft substance that has a variety of uses. Like all Field Items they spawn in supply crates scattered around the map. During certain Disrupt missions, Foam Grenades will spawn around the surface of Redacre near maze entrances so players can foam Speed Traps.

The Foam Grenade has a variety of uses and is one of the most versatile Field Item in the game. When thrown on the ground, the patch of ground will be silent to walk and safe to land on - foam patches completely negate fall damage regardless the height from which the player falls. Foam Grenades can permanently disable Acoustic Mines. They can also be used to temporarily disable Security Cameras and Enemy Drones for approximately 20 seconds. A player can throw a Foam Grenade at a door and kick it down without making any noise to negate the chance of nearby Sleepers or Lucids being alerted by the sound. Despite the lack of noise, a door kicked in with foam can still be discovered by enemies and count towards the Kids overall sin.