The God Rock is a special item that can be earned during special events or after a mission.

The God Rock is a small rock (smaller than the Humble Rock) with visible speakers and electronics on it. Previous God Rocks have been earned through events in the Hideout from a Voice. Previously, God Rocks were only rewarded after Broadcasts, but after the release of the Cursed Update in February 2020, they are also rewarded randomly after missions in Reward Crates. It used to be possible to earn one in the The Place Between similar to how Celestial Clothes are earned, but the ability to do so has since been removed.

The God Rock is a single-use item and cannot be reused or picked up once thrown.

According to developer Nullspeak, the God Rock "is one of those fakey rocks that contain your keys, hollowed out and fitted with a recorder. It replicates a weak version of the Angel sound the kids managed to record. .[1] 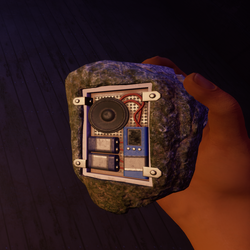 The God Rock in the player's hand.

To use a God Rock: