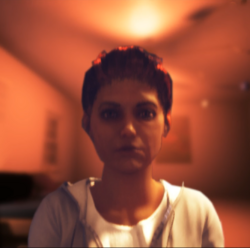 Isabela Madi-Shaw, also known as Bells by her close friends and parents, is a character from The Blackout Club (game).

Bells is a brave, intelligent, and level-headed person, managing to think rationally and calm herself down even in the face of terrifying situations. After her disappearance, her mother calls her a "survivor," stating that she would not have jumped off the Leap.[2] When others in The Blackout Club were afraid to act, Bells sought out evidence on her own, reluctantly describing them as "cowards" when frustrated by their hesitance.[3] She seemed well loved and revered by those in TBC, enough that her disappearance spurred the Club to finally act. She was especially close to Gwen, Dax, and the New Kid.[4]

When speaking with her parents while grounded, she does not hold back when expressing her frustration, replying sarcastically to her father and snapping at the both of them when her mother's employers are brought up. She dismisses their behavior and mentions knowing where they keep the car keys hidden, implying she's snuck around more than once without their permission. Despite her annoyance with her parents, she expresses shock upon being led to believe they intend to "push someone onto her," and automatically phones her dad for help when she hears an intruder in the house. These imply that despite recent events, she is close with her parents.[5] This is further shown after her disappearance, where her parents are both left devastated, but refuse to give up hope in Bells.[2]

In Devin's journal entries, Bells is described as "an angry girl," as well as "seriously PO'd" while at school. However, her and Devin are able to become friends, close enough where they feel comfortable discussing various personal topics. According to Devin, Bells is also knowledgeable in LGBT+ topics, and is "in touch" with someone out of town in regards to them.[6]

Bells is a young teenager with tan skin and short, dark brown hair. In the Prologue through her laptop screen, she is seen wearing a white shirt and grey zip-up sweatshirt.[7] Later while she is being dragged by a Sleeper, Bells is seen wearing light-colored lace-up sneakers and dark pants with small tears along the legs.[8]

Little is known about Isabela's early life. Bells and Gwen became friends when they were younger, and at some point shared what Gwen refers to as their "first kiss," where they both kissed the backs of their colliding hands. Bells was two years older than Gwen, and the two had just been friends.[9] [10]

At some later unknown point, Bells began experiencing strange blackouts like the other kids in Redacre. Together they bonded over these shared experiences, forming The Blackout Club. Bells became quite close with Gwen and Dax. When fellow club members were too afraid to start collecting evidence of the strange happenings, Bells went out on her own. During this time, Bells found a name fragment belonging to THEE-I-DARE.[11] According to Journals, she also visited Saturation Control, resulting in CHORUS to initiate an inquest.[12]

According to THEE-I-DARE, waking up from a dream in to another dream means two or more of The Voices are fighting over you. Bells suffered from such dreams, and her teacher made note of such to DANCE-FOR-US.[13] At some point, Bells spoke to a member of the Dead Skeptic, who warned them about the Voices[14], as well as shared old stories about them, documented in the journals.[15]

Shortly before the events of the Prologue, Bells had been caught trespassing at her mother's workplace. Her father later explained how this almost led to her mother losing her job. Bells had been grounded and stayed home, but during this time, she recorded a monologue about the strange happenings in Redacre and vowed to get her proof out of town by stealing her parents' car later that evening.[16] 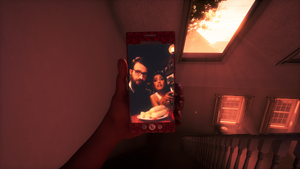 Bells on a video call with her parents.

Bells first appears in her room recording her plea for help and confirmation she obtained proof about the strange happenings in Redacre. She stores the file on a flash drive and plans to steal her parents' car once they return home. It is learned in a video call with her parents that Bells was grounded for trespassing into her mother's job which could have resulted in her mother being fired. Static breaks up the call and her parents misunderstand Bells' comment about the call quality, instead remarking how Bells will not be 'the lonely one for much longer.' After fixing the television, Bells sees a message on screen about how she must close her eyes to wake up. She closes her eyes to see a message asking her to collect images of her mother, father, and herself. While finding the images, Bells sees a shadow coming from her living room window, but the figure vanishes as Bells closes her eyes to see the glowing figure. While collecting the images of herself, mother, and father, the messages she sees with her eyes closed warn her "YOUR MIND IS NOT YOUR OWN. STOLEN IN YOUR SLEEP. YET YOUR BODY REMEMBERS.", "THEY TORE OUT SO MUCH. TOO MUCH TO MEND. THE BODY KNOWS WHAT WAS TAKEN. HEAR IT NOW. TAKE IT BACK.", and "THEY KNOW YOU SAW THEM. IT IS COMING FOR YOU." While finding these images, the Unit Tree appears in Bells' living room, later dozens of red streamers hanging from the ceiling appear as well. On her bed is an invitation, "You are invited to witness Two become one. Please save the date. Just close your eyes.". Bells is shocked at the invitation and the thought of her parents pushing someone on her. Eventually, Bells closes her eyes to see the words "WAKE UP" plastered around the room. 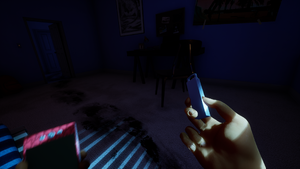 Bells waking up in her bed, checking she still has her flash drive of evidence and her smartphone.

Bells then wakes up in her bed. She grabs her flash drive and smartphone for reassurance, but strange noises outside her house spook her. She rushes into the bathroom and calls her father. Bells speaks too quietly to be heard and is cut off as the Shape enters through the front door. Bells manages to escape through a crawlspace in her house that leads into the Maze. Avoiding capture, evading detection, and receiving more messages with her eyes closed, Bells makes her way deep into the Maze. She runs into her parents, dressed in Sleeper garb, who hold Bells as the Shape returns out of a nearby Red Door. Bells breaks free and makes her way to safety by climbing out of a well with a Grappling Hook. On the surface she begins receiving text messages from The Blackout Club again and starts walking back to the the Hideout. However, at the last moment, Bells is captured and dragged away, leaving her smartphone behind.

Missions started the day after Bells' disappearance, but the game seems to have begun sometime after; newspaper clippings detail her distraught parents and how her disappearance is suspected to be a possible suicide. Bells continues to be the driving force for the other TBC members. Club members have come together to gather evidence to find out where she is and what happened to her.

According to the TV recordings in the Hideout, the search for Bells was called off three weeks after her disappearance. Her parents are interviewed by the local news station where they appear distraught about losing their daughter. In one clip, her parents beg her to come home, maintaining that she is still alive somewhere.

SPEAK-AS-ONE stated that they confiscated all of Bells' stuff after her disappearance, but she had already erased a lot of important information.[17]

THEE-I-DARE said he is unsure whether or not Bells is dead, but would want to see a body in order to be sure she is dead.[18]

In late May 2020, Bells contacted players like a Voice would, as opposed to a physical appearance or texting. Players only heard her voice, and said she had difficulty remembering things. She could remember her name, the Club, and her teacher, Mrs. Staneck. She didn't appear to recognize THEE-I-DARE's name when asked, and reacted in pain the second time she heard it.[19] She had players perform the Old Tongue for her, saying it allowed her to sense them, even though she could not see them.[20] She would eventually take them to Saturation Control and asking them to follow the path that led to the SPEAK-AS-ONE symbol. She said a man was with her and helping her, presumably The Captive.[21]

Upon hearing about the voice claiming to be Bells, both Gwen and Dax offered personal stories of Bells from their childhood together, stories that only she would know, in hopes to determine whether this voice was truly Bells or just an imposter.[citation needed] When asked, the voice was able to accurately recall the memories.[citation needed] For example, Bells discussed the story of the Haunted Armpit where Bells and Dax used climbing equipment, Dax nearly fell, but Bells caught him. [22]Dax strongly believes that it is Bells because only Bells knew that story.[23] Despite passing the Club's test, many were still concerned that these memories were just uploaded into The Song and could be repeated by anyone without SPEAK-AS-ONE. However, THEE-I-DARE stated that such personal details tend to fade when someone is taken into the Song. He was unsure if this was a trap, but if it was, it was artful and very unlike SPEAK-AS-ONE.[24]

HUNT-THE-STRONG claims to have information on Bells's fate, and says he will share it if the Club renounces the other Voices in prayer. THEE-I-DARE doesn't believe HTS is lying, and believes if the Pact manages to bind him, they could force answers from him, but by the time they manage to do so, it may be too late for Bells.[25] THEE-I-DARE says the Pact cannot act until they are positive that this is really Bells.[26]

IN-HER-TEETH believes that it isn't really Bells, and that the real Bells is dead.[27] However, according to the Isolated Watcher, Bells is alive.[28] According to THEE-I-DARE, Bells would now be at hosting age. Because she was allowed to live and is being held in Saturation Control, it is likely that SPEAK-AS-ONE wants her in the Song.[29] After SPEAK-AS-ONE learned of the Club's conversations with the Isolated Watcher, they moved Bells.[30]

Have you had an interaction with Isabela Madi-Shaw? Consider sharing your experience here!