From The Blackout Club Wiki
Jump to: navigation, search
Light of Rebellion 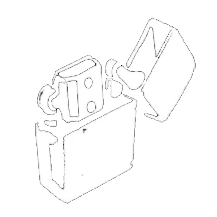 The Light of Rebellion is a special item earned after completing a mission.

The Light of Rebellion, commonly referred to as "LOR" or "LoR" in the community, is a Zippo lighter that can be used to send a short, 30 second message to one of the Voices.

According to THEE-I-DARE, the Lights of Rebellion started as a symbol of superstition, originally meant for him. It was believed that you would die if you held a lighter of a certain color. The lighters would not truly kill you, but one year, someone died while being seen with one and the story spread. Believing the object to be cursed, SPEAK-AS-ONE made them forbidden, and destroys any that are sent to them.[1]

To improve the odds of earning a Light of Rebellion, players should collect the most amount of Bonus Evidence possible in the mission to guarantee their chance at earning a Light of Rebellion. The amount of Bonus Evidence needed to earn a Junior Detective will vary depending on the combination of objectives in the mission. This includes collecting the CHORUS Binder pages in the "Recover the CHORUS Binder" objective, all the blood spots in the "Hide Evidence" and "Bag Up the Dead Bird" objectives, and etc. Extra bonus evidence gathered, like making extra enemies dance in Dance Fever, will help players improve their chance of earning the highest badge type to improve their Light of Rebellion odds.

Players can earn successive Lights of Rebellion quite quickly, sometimes in back-to-back missions, while at other times, it may take several weeks to earn another Light of Rebellion despite earning mostly Junior Detective badges.

Light of Rebellions received on a mission appear in the Hideout in a green supply crate, the same used to deliver Old Tongue gestures and other rewards.

Light of Rebellions received from sacrifices appear in the Hideout in red supply crates used in missions to store field items. 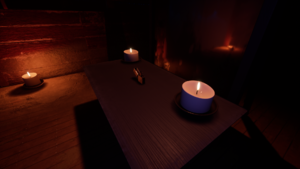 A Light of Rebellion on the altar in the Hideout

To use a Light of Rebellion in a ritual:

Rituals are not guaranteed a response. Players have up to 30 seconds to say whatever they wish and send their ritual to a Voice of their choosing. Players often ask a question to a specific Voice in mind to learn more about a particular topic about the lore. Not all rituals are serious questions, however. Some players tell jokes to get the attention of LAUGH-LAST, other players sent music to DANCE-FOR-US per her request, SPEAK-AS-ONE followers use rituals to destroy Name Fragments.