From The Blackout Club Wiki
Jump to: navigation, search
Lucids 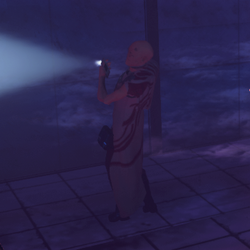 Lucids are one of the enemies found in The Blackout Club (game).

Lucids are relatively similar to their blind counterpart, Sleepers, but possess the ability of sight. Unlike Sleepers, Lucids are able to use their sight to observe their surroundings and any meddling Blackout Club Members nearby. Lucids also form coherent speech, express thoughts and emotions, and even some objections to what's going on. They are known to taunt and coax members of The Blackout Club by pretending to be a concerned, responsible adult. Lucids are fully aware of what's going on in Redacre.[1] Sometimes when finding a body, they will speak as if they've found a corpse; it has been explained that these lines only remain from previous development states, for when players tossed bodies off cliffs or had "accidents".[2][3][4] Canonically the Blackout Club Members do not kill, and the Lucids are well aware of this.[5] SPEAK-AS-ONE says they have lost Hosted Eyes (Lucids) to melancholy, perhaps because of the children that are killed by the Shape.[6]

Lucids are Hosts and can no longer sleep, prevented from it by SPEAK-AS-ONE. When asked about how the Lucids express regret about not being able to sleep next to their loved ones, or how they miss dreaming, SPEAK-AS-ONE said it is “a necessity until all join the Song”. Sleepers are considered "pure" in The Song, and Lucids are chosen to defend them. SPEAK-AS-ONE considers it an honor and pities them for the sacrifice they had to make.[7] They patrol throughout the night until 5AM, when they return to their homes and often unaware families to blend in.[8] Lucids would argue vehemently that rather than worship SPEAK-AS-ONE, they are part of them.[9] The identities of the Lucids are unknown, but they are residents of Redacre. According to ambient dialogue, they used to be Sleepers at one point before becoming a Lucid as they recall the pain of the Sonic Fences from their time sleepwalking. Those who are already lucid can recommend Sleepers, who, if approved by The Voice undergo a procedure to become lucid themselves. [10] "They enter paired sensory deprivation chambers - it is important that they have a partner, to hear the Voice reinforcing a massive array of aversions to the sleep instinct. Their own mouth eventually begins to form the words at the same time, but only for the mantra that begins the changes in their minds." [11] How much of their original personality and memories remains is unknown. Traveling through Red Doors causes them both memory loss and gain, and a Watcher has described them as "MANY TONGUES. ONE MIND.".[12]

Idle Lucids often remark about The Voice, Isabela Madi-Shaw, and even their children potentially being members of The Blackout Club. One particular Lucid line refers to having seen The Voice directly:

According to a developer from Question LLC, the Lucid is referring in this quote to the current host of the Voice still serving; some Lucids have never met the current hosts in person.[14]

Lucids have musical note aliases in the Madi-Shaw Inquests on the laptop in the boxcar, in order to conceal their identities.[15] One known lucid is Chiara Esposito, an 11 year old that lives at 918 Hoadly. She is exceptionally unusual in her ability to become a host at such a young age, and SPEAK-AS-ONE hopes more are born with the "RARE CLARITY" she has.[16]

Lucids have unique outfits compared to the Sleepers. They wear a gray, sleeveless jacket embellished with silver material. On their back is a billowing cape with a red, wavy pattern. Underneath this jacket is a red shirt. The Lucid's left arm has no sleeve, their right arm also wears a black, elbow-length glove. Lucids wear maroon pants with black thigh satchels on both legs and tall black boots. Under normal circumstances, they would never wear these uniforms above ground, instead dressed as police, construction workers, and so on. They wear their uniforms openly in response to the emergency caused by Bells' disappearance.[17]

The blurred face of a Lucid.

A unique feature of the Lucids is their distorted face. The Lucid's eyes and lips float around their face like a churning soup. The residents of Redacre have been brainwashed to see Lucids' faces this way.[1] The edge of their face is blurred like heat haze. Lucids appear bald, and their ears remain in a fixed position on their heads. This effect makes it impossible for TBC members to identify the Lucid.

There is no discernible difference between a female or male Lucid other than their different voices.

Lucids are able to see their surroundings. Some wander around while others may stand guard in one place. Due to their ability to see, it's advisable to stay either behind them or hidden away in the shadows as Lucids are able to visually spot the kids. Lucids can hear, but not as well as Sleepers. It is still advisable to stay quiet around them. If a Lucid goes on alert, they will pull out their Smartphone and turn on the flashlight to aid in their search. If a Lucid sees a Club Member they are unable to apprehend themselves, they may make a call on their smartphone, such as "Hello, sir? We have a visual but need... yes. Please send it here." This typically results in The Shape appearing soon after to apprehend the most sinful Club Member. Lucids, will kneel like Sleepers in the presence of the Shape, sometimes chanting "SPEAK-AS-ONE" repeatedly. Lucids may often make remarks about their fear of the Shape while in its presence as well.

Like Sleepers, Lucids can be easily distracted by noisemakers or other Field Items. They can also be distracted by the upgrade to the Hacker major power, War Dial, but Lucids can still break out of the call for loud noises or visual distractions. An effective way to subdue Lucids is by hopping on their backs with the Takedown major power. Once on the ground, Lucids can be pinned and held in place like a Sleeper. Lucids can also be KO'd using a Tranquilizer Dart (either with the Crossbow or simply using the dart at close range) and Sleep Tripwire for the rest of the mission. Throwing a Foam Grenade at a Lucid or a Flash Bang nearby them will temporarily stun the Lucid.

Lucids can travel through Red Doors like Sleepers and The Stalker.

A member of Question LLC confirmed that at higher levels, "a roving band of Lucids use red doors to patrol near their assigned player. We spawn at least one per player once they are above a certain level."[18] This sometimes explains why high-level players often see Lucids patrolling their location, regardless where on the map they are.

For quotes Lucids say during mission:

The Blackout Club Wiki has a collection of images and media related to Lucids. Please visit the gallery page to see additional images, media, and to add your own to the collection.