From The Blackout Club Wiki
Jump to: navigation, search
Rebar 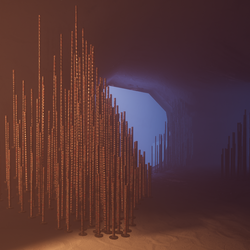 Rebar is an environmental hazard found in missions in the Maze.

Patches of rebar exist throughout the Maze in large clusters. Coming in contact with a piece of rebar causes the rebar to emit emit loud noises. The noise persists while the player remains in contact with the rebar. Sleepers, Lucids, and The Shape are drawn to the sound of rebar from quite large distances due to the amount of noise generated. Rebar is used in construction and in the Maze indicates the room is incomplete or construction is ongoing.

Rebar can be found in most large areas of the Maze: the Plexus and String Relay B.

Enemies' pathing sometimes causes them to come in contact with rebar in the Plexus at random times.

There is no way to silence or deafen rebar, so avoidance is the best strategy. Since the rebar patches will not make noise unless a player or enemy comes in contact with the rebar, remaining mindful of rebar locations in a room and the player's proximity to the rebar is the best strategy to avoid alerting nearby enemies. After alerting enemies with the noise generated by the rebar, players still have an opportunity to avoid capture by utilizing changes in elevation or Field Items to stun or take out enemies.