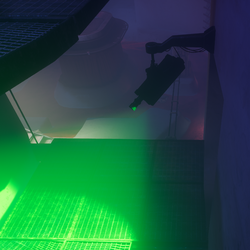 The Security Camera is an environmental hazard found in missions.

The Security Camera is a device found in the Maze used to detect players in an area. Security cameras randomly spawn on different missions and can also be found mounted to the underside of Enemy Drones. The security camera emits a bright light to indicate its status:

Security Cameras can safely be avoided as long as one stays out of its light. Like the Enemy Drone, the Security Camera's three modes help indicate to players when the camera notices them (yellow) and when it will begin to alert enemies (red). Players can stand in the path of the camera when the light is green or yellow without it alerting enemies. When the camera turns red, the camera will report the Sin of witnessing the player to nearby enemies who will converge on the location. If the Shape has emerged, it will respond to reports of camera detections.

Throwing a Foam Grenade at the camera will temporarily disable it. If one has the Hacker Major Power third upgrade, Off the Grid, players can use it to temporarily disarm the security camera with their smartphone, allowing for safe passage. Only one camera can be hacked at a time; hacking a new camera (either on a normal camera or on a drone) will cause the previously-disabled camera to activate again. When disabled, a timer will appear by the camera to denote the time until it will be active again.