From The Blackout Club Wiki
Jump to: navigation, search
Sleepers 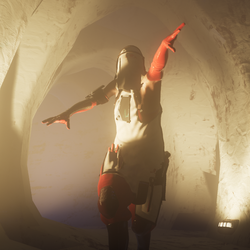 Sleepers, also known as Sleepwalkers, are one of the enemies found in The Blackout Club (game).

Sleepers are the resident adults of the town of Redacre, who have been coerced into working for SPEAK-AS-ONE during the night in their sleep, under control of The Song. According to SPEAK-AS-ONE, Sleepers are "unwitting servants" who "serve us in the body".[1] Due to being asleep, they cannot see, but have exceptional hearing and dislike being disturbed from their work. From parents to teachers, most if not all adults have fallen under SPEAK-AS-ONE's control. Unlike Lucids, Sleepers are unaware of the events in Redacre and what they do as a Sleeper at night. SPEAK-AS-ONE rotates Sleepers in shifts so the sleep deprivation doesn't build up to lethal levels.[2] Sleepers wake in the morning with pains, aches, and bruises, but have no memory of what they did the night before. It is likely some Sleepers have attacked their own children or dragged them to the Shape without ever knowing.[3] However, errors may occur that allow the Sleepers to retain some memory of the maze. [4] Sleepers are often found mumbling weird stories, sometimes speaking the same words simultaneously with other Sleepers. The stories are "truth", verified in the Song.[5] That is to say, the stories are not their own memories, but memories that have been encoded into the Song.[6] While most Sleepers will remain Sleepers for the duration of their lives, they may be chosen to become Lucid. According to a developer, "Sleepers are recommended for the Lucid procedure by others who have undergone it. Then approved by the VOICE (current paired-Host interpreter of the Song. Kind of like a leader but oddly beholden to the wisdom of the crowd.)"[7]

Though all Sleepers are functionally the same, cosmetically, there are two types of Sleepers:

Found on the surface of Redacre, some Sleepers wear their pajamas and a special CHORUS-branded sleep mask that emits a blue-ish glow around the edges.[3] There are two versions, a "mother" and "father", wearing various colors of satin pajamas. The masks found during the Exorcism mission are Chorus masks that have been tampered with by an unknown party. 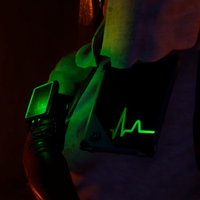 The heart monitor visible on the arm and chest of a Sleeper.

Found in the Maze and sometimes on the surface of Hoadly's Leap, Elite Sleepers wear specific "uniforms" and appear as an assimilated member of a cult. They wear red elbow-length gloves, red pants outfitted with knee-pads, and black boots. Under their white aprons are red suspenders. Various tools with red handles are stored in the front pockets of the apron. These red and white clothes help them to labor on the Instrument. Unlike the Pajama Sleepers, Elite Sleepers have a heart monitor with indicators on their arm and chest that changes color depending on their mood and level of alertness:

The Elite Sleeper's clothing removes all identifiable traits of the person underneath; it is one of the reasons why The Blackout Club members have a rule against killing Sleepers - "It could be your Mom! Or worse, mine!"

Sleepers normally lumber around on patrol through that changes with each mission. Unless alerted, these Sleepers will stay on that path. Carefully watch Sleepers to get a good idea of the path they wander. Once alerted, Sleepers will try their best to go to the source of the noise and may follow a different path to find the culprit. Sometimes, Sleepers will stay in one place to scrub the floor, allowing easy access to those who wish to sneak around them. They are the most abundant enemy in the game. 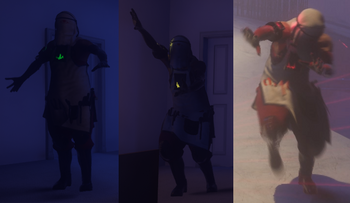 The chest monitor and right arm changes from green, to yellow, to red, as the Sleeper goes on alert and then to attack.

Due to being completely blind, the best strategy to avoid conflict with a Sleeper is to remain crouched and sneak around them without alerting the Sleeper of your presence. However, due to their exceptional hearing, one has to pay attention to the surface of the ground, as walking on different surfaces will make more or less noise (i.e. walking on carpets makes little noise while walking on the pavement will create sound even when crouching). The device on a cult Sleeper's arm can tell one the mood of the said Sleeper and if they detect the player or anything else suspicious, sometimes from a great distance.

An idle Sleeper will walk around, patrolling the area with their arms out and their heart monitors emitting green light. Listening to the weird dialogue of idle Sleepers sometimes gives insight into the weird happenings of Redacre. If a Sleeper detects a player or any suspicious behavior, they will go on alert and their heart monitor will turn yellow. Sleepers on alert will hunch over slightly, their arms sticking out looking for something to grab. Sleepers whose heart monitors are emitting red light are ready to attack the player and confident of their presence. Sleepers on attack will run towards the player or the location of the suspicious activity with their arms out ready to grab any meddling Club Member they find.

Sleepers can be easily distracted by Noisemakers or Prank Call; Sleepers can break out of the distraction if they hear too much noise. Sleepers can be taken out by hopping on their back or using items. The Takedown allows the player to pin the Sleeper in place. Using a Tranquilizer Dart (either with the Crossbow Hero Item or by stabbing with the dart at close range) or a Sleep Tripwire will permanently knock out the Sleeper for the mission. Throwing a Foam Grenade at a Sleeper will temporarily slow them down when being chased.

When caught by a Sleeper, there are a variety of items usable to help escape: Stun Gun, Flash Bang, and Tranquilizer Dart. Alternatively, if a player has no escape items, they can push off the Sleeper at the cost of a portion of their health, shortening the player's total stamina until healed with a bandage. A teammate can also hop onto the back of the Sleeper to free a grabbed teammate or use a field item. If a player has too low health and is grabbed, the player will be dragged by their feet to the nearest Red Door to be suppressed by the Shape. There is a small window of opportunity to grab an escape item from trash bags while being dragged. Successfully grabbing an escape item allows the player to temporarily stun the Sleeper who is dragging them and provide a moment for escape.

For quotes Sleepers say during missions:

For special quotes Sleepers say when idle during missions that give insight into the strange happenings of Redacre:

The Blackout Club Wiki has a collection of images and media related to Sleepers. Please visit the gallery page to see additional images, media, and to add your own to the collection.