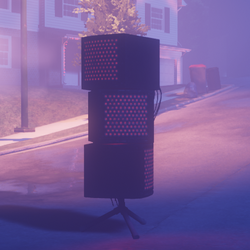 The Sonic Fence is an environmental hazard found in missions.

The Sonic Fence is a set of speakers set to restrict The Blackout Club members on the surface of Redacre. Getting too close to these Sonic Fences will cause vision to go dark and a sharp irritating noise will be heard. These effects worsen the closer the player gets to the fence. If a player gets too close, they will become suppressed. Lucids often remark how they should check the Sonic Fence but loathe doing so. They wonder if their body remember being a Sleeper and experiencing "such pain".

According to SPEAK-AS-ONE, the sonic fences are like the The Song, but inverted, and proximity to them causes pain to those who are awake, as well as those who are asleep.[1]

THE-MEASURE-CUTS helped design the founding theory of the sonic fences during his alliance with SPEAK-AS-ONE. SPEAK-AS-ONE commented that “it took a mind apart from ours to consider distorting the Song.”[2]

There is no way to "disarm" Sonic Fences as they're used by the game to keep players within the boundaries of the playable area. Typically, Sonic Fences are placed in temporary areas, like across Hoadly Ave to prevent low-level players from accessing Lower West Hoadly, Old Growth (Region), and other areas of Redacre. It's best to keep a mind where Sonic Fences can be while out on missions. The best option is to avoid coming into contact with the Sonic Fences entirely. Players who approach a Sonic Fence will see their screen darken, a loud, static noise will be heard, and the player's character will begin to cry out in pain. The player still has an opportunity to turn back and avoid becoming suppressed without permanent damage. Getting too close to the Sonic Fence will result in a counter appearing that describes the distance remaining until the player becomes suppressed.