From The Blackout Club Wiki
(Redirected from Stalker Van)
Jump to: navigation, search
"We came, we saw, we...still need a catchphrase!"
The Stalker Van has not been given an official name. This name is conjectural and will be used until an official name is provided. 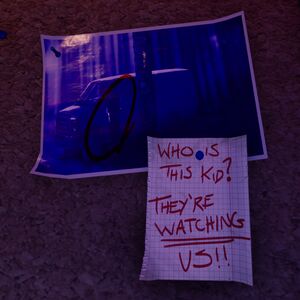 The Stalker seen outside their van. The image posted inside the Hideout

The Van is the Stalker's main base of operations.

The van is the Stalker's hideout and exists as the hub counterpart to The Blackout Club's Hideout.

The base consists of an old abandoned white van located somewhere in the woods. Compared to the Hideout, the van is small in comparison, but big enough to house the Stalker. There is a computer in the van that allows the player to access the Stalker Leaderboards or to start an invasion. There is also a small clothing rack which allows the Stalker to change their look. The player has access to the same customizations. A handwritten note on the desk in the van reminds players their goal: record The Blackout Club members, report the club's activities, and stop them.