How To Play: Suppressed

From The Blackout Club Wiki
(Redirected from Suppressed)
Jump to: navigation, search

Being Suppressed is a mechanic in The Blackout Club (game). 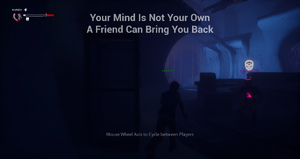 The suppressed player spectating a teammate coming to save them.

Players can be suppressed two times in a mission. If the player is caught by the Shape, falls, or goes out of bounds of the map, the player character will die. Players who die cannot be revived and remain in the third person spectator view of the other players for the remainder of the mission. The now-dead player's body can be picked up and moved around by other club members. If all players in the match are suppressed or die, the mission will fail. 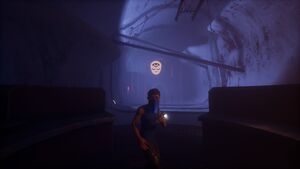 A suppressed player as seen in game.

Being suppressed by the Shape.

Field items can be used on suppressed teammates like on regular enemies to stun and make it easier to revive. Throwing a Flash Bang, Foam Grenade, using a Sleep Tripwire, shocking them with a Stun Gun, shooting/stabbing them with a Tranquilizer Dart, or even throwing a Grappling Hook at them will all temporarily stun the suppressed character and open a short window to rescue them.