From The Blackout Club Wiki
Jump to: navigation, search
THEE-I-DARE

THEE-I-DARE is one of the Voices in The Blackout Club (game).

THEE-I-DARE, also known by his acronym TID, seems to represent the idea of taking risks, daring oneself to challenges, and rebellion. He can be sacrificed to and sent prayers if the player has the Light of Rebellion. He has also been known to speak to the club members during Missions.

THEE-I-DARE has stated in at least one interaction that his Hosts "choose him", rather than him making the choice for them.[1] TID has also been able to remark when players are unsafe in missions, noting that he will wait to speak until they are safe.[2]

After his shattering, his new domain is choice, as opposed to blind rebellion.[citation needed] He may not agree with someone's choice, but he respects it.[3]

THEE-I-DARE's first host was a woman known as the "Daughter of Doubt". She was once a part of the Sleeping Voice (SPEAK-AS-ONE), as everyone was, a pair of hands under one mind. She changed when she was sent in to a narrow, lightless cave by herself in search of supplies, isolated. This was when THEE-I-DARE awakened. When she was ordered back in to the cave, she and THEE-I-DARE refused. This was how she earned her name.[4]

THEE-I-DARE was the first Voice to wake humankind. Two tribes were formed, his and SPEAK-AS-ONE's. For thousands of years, they warred with each other.[5] THEE-I-DARE gave humankind will and taught them language and words.

LAUGH-LAST was born and used it to talk nonsense.[6] LAUGH-LAST brought the idea of jokes in to the early tribes of mankind. Confused, THEE-I-DARE shunned LAUGH-LAST, because he saw joking as dangerous to survival. THEE-I-DARE didn't realize it was a means for coping, and blames himself for LL becoming vindictive.[6]

Some people, on principle, will do the opposite of what they are told. This is how the concept of "dares" came to be, and thus THEE-I-DARE became bound by them.[7]

THEE-I-DARE was destroyed by fellow Voice, SPEAK-AS-ONE, after he rose to rebel against them. His name fell into pieces and fragments of his name were scattered all throughout Redacre. His Hosts were destroyed in the "Great Cull" that ended shortly after the game's Closed Beta during Early Access. According to THEE-I-DARE in an interaction, his siblings would "not remember me fondly".[2]

Isabela Madi-Shaw spoke with THEE-I-DARE, but according to THEE-I-DARE, that part of him was "snuffed out".[2]

THEE-I-DARE has remarked an interaction that long ago he chose friends poorly when his brother, LAUGH-LAST, sold TID out.[8]

Thousands have tried to reconcile SPEAK-AS-ONE and THEE-I-DARE, but all have failed.[9]

THEE-I-DARE stated he once lived for the dare, but not for the thrill of it. It was the act of opposition. THEE-I-DARE could not abide a stated rule. Eventually, many learned they could control or compel THEE-I-DARE through this, by daring him not to do something that was in keeping with his ethos.[5] Players assumed this was how HUNT-THE-STRONG was able to manipulate THEE-I-DARE to destroy the symbol belonging to Colm Ryan, because in doing so, he would be liberating Nayeli's and Siobhan's baby from SPEAK-AS-ONE's influence.[citation needed] 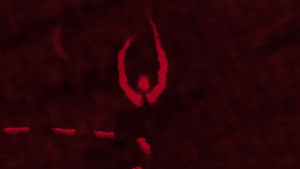 During the final week of The Blackout Club (game)'s Closed Beta in late October 2018, the "last gasp of old confrontational TID" visited players in what were some of the earliest Player Interactions of the game.[11] This voice called itself "The Adversary" to players.[10] First speaking to players in missions in Redacre, the Voice informed the groups they were having a blackout where they were then transported to The Moon. On the Moon, after the initial shock from players calmed down, "The Adversary" explained to groups they would be going on "A LITTLE WALK" that required players to "IGNORE THE RULES, THE ROUTINE".[10] Groups would then be transported into a mysterious maze-like location with their eyes forced shut and the adversary's "name burned on your eyelids" (see thumbnail on the right).[10] These groups were sent into what is now known as Saturation Control. Some groups were successful in following the symbols while others were captured by the Shape-like entities in the location. One player in particular, upon failing to make it to the exit, was told by the Adversary, "YOU FUCKED UP" but was assured "YOU WILL FIND YOURSELF, BUT THAT DAY IS NOT TODAY."[10]

After the interactions of the Closed Beta, The Blackout Club (game) entered Early Access and at this point, THEE-I-DARE was fragmented.[citation needed]

THEE-I-DARE said he no longer speaks because his voice being backwards scared potential Hosts and drove them away. The one speaking backwards in dreams is an echo of him, twisted and confused.[12]

Some members of The Blackout Club have started collecting pieces of his name to put him back together, however some give the Name Fragments to SPEAK-AS-ONE to be destroyed. Despite this, THEE-I-DARE continues to strengthen, saying once he is restored he will be able to give "more substantial help, for certain" after he regains his voice. He told club members that in order to empower him, they need to keep the Name Fragments they find.[13] Name Fragments allow THEE-I-DARE to find you easier, and also can use them to hide you briefly from SPEAK-AS-ONE.[14]

Upon learning that THEE-I-DARE survived the shattering, SPEAK-AS-ONE is hunting him again once again.[13]

THEE-I-DARE stated he does not know where Bells is or if she is alive. [2]

In early February 2019, THEE-I-DARE spoke with players about how he is changing. He previously could not understand humor but was able to better understand it at that time. THEE-I-DARE knew a change was coming for him and reminds the players that after he changes, the players helped him enough and they owe THEE-I-DARE nothing. THEE-I-DARE's change would be a victory, but not the end.[8] TID will often remark that THEE-I-DARE is the name he was previously known as. He said that mankind called him that long ago, but now he feels different after his fragmenting.[15] Now, he feels he lives to free our kind, from those who wish to control others, and especially from the Voices, for their control is more subtle.[5] He says he will learn his new name when he regains his voice.[14]

THEE-I-DARE said an alliance between him and his siblings to shatter SPEAK-AS-ONE was unlikely, due to their distrust of him and their opposed interests.[16] Still, he was interested in knowing more about them, if any of them still trust him or miss him. He said he should bury grudges, since SPEAK-AS-ONE is the true enemy.[15] THEE-I-DARE says he respects IN-HER-TEETH's desire to end the Voices, and agrees humans could do without his kind.[17]

THEE-I-DARE became ill after seeing the broken symbol in 922 Hoadly, though he could not remember what happened in that room. He was weakened to a point that he was only able to talk to someone one at a time, bound by the ritual they sent.[citation needed] After the mystery behind the broken symbol was solved, that HUNT-THE-STRONG used him to destroy CHASE-THE-SUN, he recovered and was able to speak to entire groups once more.[18] The Hunter was only able to control THEE-I-DARE through a viable dare. In a twisted sense, THEE-I-DARE was liberating the baby from SPEAK-AS-ONE's influence, and therefore, still acting within his ethos of freedom. One of the reasons he was unable to remember what happened is because HUNT-THE-STRONG convinced him that he needed to forget, or else his Hosts would be captured, and Colm Ryan's baby would be found. On that note, he realizes he should locate the missing baby.[19]

THEE-I-DARE hopes to use HUNT-THE-STRONG's vanity against him. THEE-I-DARE says the Hunter's child followers may act like him, but eventually, they grow up. THEE-I-DARE believes the Hunter is too vain to think someone truly like him would turn away from him. He wants to find a child trusted by HTS, and wants them to spy on him for the Pact.[21]

After being made aware of HUNT-THE-STRONG's broadcast[22], THEE-I-DARE doesn't believe he is lying about having information about Bells, because he sees lying as weakness. Still, the offer is worrying and potentially dangerous. THEE-I-DARE thinks if the Pact manages to bind HTS, answers could be forced from him, but by the time they manage to do so, it may be too late for Bells.[23]

Have you had an interaction with THEE-I-DARE? Consider sharing your experience here!

THEE-I-DARE has responded to some players' rituals, heard as dreams when returning to the Hideout after successfully completing a mission.