From The Blackout Club Wiki
Jump to: navigation, search
The Shape 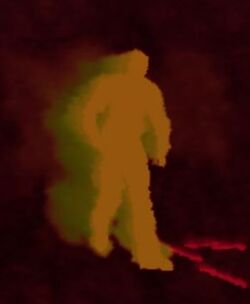 The Shape is one of the enemies found in The Blackout Club (game).

The Shape is a mysterious, invisible enemy that appears if enough Sins are committed during missions by the kids. The Shape is humanoid in physique, but cannot be seen directly with the naked eye and the TBC members must close their eyes to see it.

As The Instrument is the only known means of communication with the Shape, the change in The Song is how SPEAK-AS-ONE directs the Shape on who it should target.[1] It cannot hear anything but the Song, which is steadily revised to keep it from attacking SPEAK-AS-ONE as well.[2] The Angel knows only sin and judgment, even amongst The Voices. the Voices cannot communicate with the Shape because it is bound only to the Song.[3] It listens to no one besides the Song, even though some have tried to control it. SPEAK-AS-ONE puts an end to any attempts to do so.[4] According to a developer from Question LLC, the Shape "was made via a painful process and is completely immune to the influence of the Voices, even SPEAK-AS-ONE followers seem to fear it judging them."[1] SPEAK-AS-ONE said the Shape was created out of their anger, from an act of great sacrifice and pain, in the beginning when THEE-I-DARE broke away from them.[2]

THEE-I-DARE does not believe they can replicate the Shape, as what they learn of it, they forget. THEE-I-DARE is not sure how SPEAK-AS-ONE is able to do this, but he said the Shape is the "judgment of the community" and only exists to punish sin.[5] He wonders if SPEAK-AS-ONE even remembers how the Shape was bound.[3]

To the naked eye, the Shape is near-invisible. Players can close their in-game eyes to reveal the Shape's physical form: a glowing, humanoid figure like a "burning shadow".[6] At close proximity, the Shape's figure can be seen due to light refracting around its body. Red fringes appear on screen and increase in size to indicate the Shape's proximity to the player and position relative to their location based on where on the screen these fringes occur.

Upon entering "Angel mode", the Shape will gain two red, wing-like features that can only be seen when closing your in-game eyes.

The Shape suppressing a player.

The Shape emerges from the Red Doors when enough sins have been reported by Sleepers, Lucids, and (if opted-in) the Stalker during missions. The Shape will appear through a Red Door near the latest sin report to begin investigating and hunting down the most-sinful player (the player with the most sin attributed to them). The Shape's target is always displayed in-game on the HUD. If you, the player, are the Shape's target, your HUD eye will display red marks around its exterior with accompanying text above. If a teammate in the mission is the Shape's target, the same markings will appear on the player's major power icon in the top-left corner of the screen. The Shape can switch targets at any moment as new sins are discovered and reported by enemies.

The Shape will continue hunting the most-sinful player until that player has been Suppressed. According to a developer from Question LLC, the Shape "will never leave until it catches its target, at that point it will switch to the next highest sinner if anyone has enough sin to be a target, if no one does, it will leave.".[7] In very rare cases, the Shape will stop targeting players and disappear back behind the Red Doors to leave players alone. This break from the Shape, however, is only temporary, it will return when more sins are reported by enemies. The Shape receives notifications of sin reports and will often travel to the location of the report to investigate the area in search for its target. The Shape is not omniscient and can lose track of its target,[8] but its relentless search will cause it to begin responding to any sin reports received in search of the player.[9]

Traversing through Red Doors or hatches around the map, the Shape's emergence is accompanied by a loud and bright burst of light. This is a distinct feature of the Shape's travel and can be used as an indicator of the Shape's arrival in an area.

The Shape can see better in the dark than Lucids.[10]

When the host begins reaching a high Level (considered Level 6 and above), the Shape is able to enter a the "Angel mode". The Blackout Club (game) indicates this by alerting players with an on-screen text saying The Shape is Changing.... Angel Mode is activated after the Shape's normal behavior period if the Shape is unable to catch its target player after some time. The Shape will become more aggressive, faster, and will sprout a pair of wings that allows the Shape the ability to make large jumps and leaps. The Shape's wings, despite their flapping appearance, do not allow the Shape to fly.

When the Shape leaves Angel Mode, players will see on screen The Shape is Satisfied. The Shape then begins the cycle again where if it does not catch its target after some amount of time, it will enter Angel Mode again.

The best strategy to avoid the Shape is to commit less Sins. The Shape spawns only after a threshold of sins are reported by enemies. If sins are committed less frequently, this will prolong the time it may take for the Shape to come out and may even allow the group to complete the mission without the Shape emerging at all. In addition, the Shape only targets the player with the most overall sins. A player who commits less sins than their fellow TBC members in the mission is likely to delay the Shape targeting them in favor of more sinful teammates.

The Shape, like Sleepers and Lucids, is not a fast climber in its normal mode and will be slow to get onto roofs and other high, out-of-reach places.

If a player is caught by the Shape, they are unable to use items or do anything to escape. Fellow teammates can use most Field Items to interrupt the Shape from grabbing a player to grant a small window of escape.

Once suppressed, the player loses control of their mind. Suppressed players will typically wander around or potentially travel to other parts of the map. Players caught by the Shape still possess sight and thus will run away from teammates if they spot teammates in the vicinity. Teammates can rescue players grabbed by the Shape by sneaking up behind them or stunning them so they can be revived. Revived players will be told "The Shape notices your absence from the Song" after the first revival, and "You will not be added to the Song" after the second revival. Being caught three times by the Shape will result in permanent death and the player cannot be revived or take part in the remainder of the mission. Despite losing control of their mind or being killed, suppressed players can still communicate with teammates through the in-game voice and text chat. Suppressed players can view their character and fellow TBC members in the mission in a 3rd person perspective.

Foam Grenades can be thrown at the Shape to coat part of its body. If the Shape steps through foam lying on the ground, the Shape will leave temporary footprints as it walks around. Passing through Red Doors will clean the foam off the Shape.

The Blackout Club Wiki has a collection of images and media related to The Shape. Please visit the gallery page to see additional images, media, and to add your own to the collection.