From The Blackout Club Wiki
Jump to: navigation, search
The Stalker 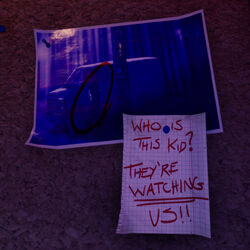 The Stalker is a character and an opt-in PVP mode in The Blackout Club (game).

The Stalker does not have much of a provided personality. They seem motivated enough to want to betray The Blackout Club and cause the other kids harm in exchange for protecting their family, but most players opt to treat this as a canvas for developing a character through roleplay (RP).

Sometime before the events of the game, the stalker may have been a member of The Blackout Club (Group) as the Stalker is often referred to as a traitor to the Club. DANCE-FOR-US has also informed players through Recalled Dreams that SAO has sent Stalkers after players, a kid who might have been your friend once, but now serves DFU's "parents".[1][2]

The Stalker Van is the base of operations for the Stalker, like the Hideout is to club members. The abandoned white van is located somewhere in the woods of Redacre. 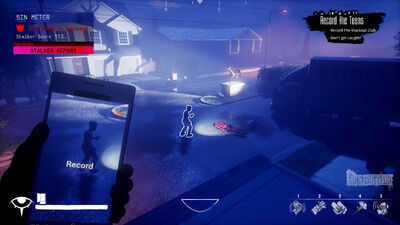 The stalker's view in game, recording evidence of The Blackout Club's activities. Note the sin notification in the top-left corner.

Stalkers have to record evidence of The Blackout Club members as part of a deal with the Voice, SPEAK-AS-ONE. If the Stalker collects evidence of the club members then SPEAK-AS-ONE promises they will not hurt their family. To collect this evidence, the Stalker invades a random mission organized by The Blackout Club to record evidence of the Club using their Smartphone and work with the club's enemies - Sleepers, Lucids, and the Shape.

According to a message in the Stalker's Van, it suggests SPEAK-AS-ONE does not allow the Stalker to sleep. They also seem to be under some effects from the Song, although they are more awake and aware than Lucids. In the Hideout, someone seems to have snapped a blurry picture of the Stalker and their van, worried the stalker was watching them.

SPEAK-AS-ONE says that captured stalkers are released by Lucid patrols and go home after their stalks. Some stalkers are also interrogated for information by the club kids.[3]

The Stalker's objective as seen in the team menu while playing as the Stalker: 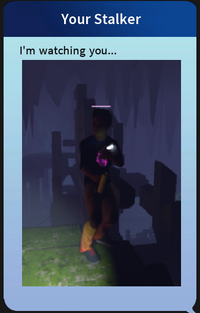 TBC members receive a message with a photo of what the Stalker recorded. In this case, it was a TBC member directly.

The Stalker will secretly invade a random mission to sabotage club members, with some conditions:

Not all missions will have a stalker invade. Stalking styles vary from player to player, but there are several signs that can indicate a Stalker's presence:

The Blackout Club members are alerted each time the stalker records evidence against them. This includes sins they are committing at that moment, sins they have already committed, or direct pictures of TBC members in the mission. The Blackout Club members are able to stop the Stalker if they can catch and subdue them. Stalkers are susceptible to the effects of field items like tripwires and flash bangs at the hands of TBC members like a Sleeper and Lucid. When shot or stabbed with a Tranquilizer Dart, the Stalker loses all stamina. When grabbed by a TBC member, Stalkers cannot break free of the struggle. The Stalker does yell out for help to nearby enemies who can interrupt the Stalker from being caught. Once a stalker is caught, the group is no longer susceptible to other stalkers during that mission. All members in the party receive a dossier as a reward for catching the Stalker after returning to the hideout regardless if the mission was completed successfully or not. The player who subdued the Stalker gets an additional "Stalker Caught" bonus (an additional 150 XP). 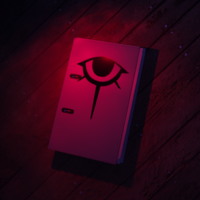 A dossier, awarded back in the Hideout to each club member after capturing a stalker in the mission.

The Stalker can invade missions from inside the Stalker Van. The Stalker must first possess a Dossier to invade a mission. These can be acquired by playing as a TBC member in missions and capturing a stalker or by purchasing one with Snacks in the Van. Though incredibly rare, players have received a divine gift of a Dossier from SPEAK-AS-ONE. Once in the mission, the Stalkers has to record evidence of the Club's activities. Stalkers can accomplish this by recording acts committed by TBC members: kicked-in doors, KO'd Sleepers and Lucids, recording TBC members directly, among other things. Actions and items that can be recorded by the Stalker will have a TV-static overlay (like Bonus Evidence).

The Stalker enters the mission unannounced to TBC members. A Stalker can appear at any time with the exception of the Exit Map objective. Stalkers can travel through red doors throughout the available parts of Redacre and the Maze (determined by the host's level). Any footage recorded will be reported back to the enemies and may alert nearby Sleepers and Lucids to investigate the location. The Stalker also sends photos of the evidence back to the TBC members; it's advised not to stick around very long after recording evidence. The Stalker has access to see the level of sins reported and the sin threshold needed to spawn the Shape. The Shape will come out to suppress the sinning club members starting with the most-sinful player.

If a club member gets too close to a Stalker, the Stalker can be captured. During the capture process, the Stalker is unable to do anything. If successfully caught, the Stalker is booted from the game. The TBC members can also complete the mission without catching the Stalker. The Stalker has no indication of the TBC members' current objective or mission progress unless stumbling on objective items or the group completing an objective.