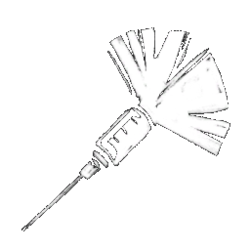 The Tranquilizer Dart is one of the Field Items found in missions.

A dart loaded with a tranquilizer serum that is sure to knock out anyone who is unfortunate who gets pricked by it. Like all Field Items they spawn in supply crates scattered around the map or purchased from Firework Stations and Contraband Lockers for 50 snacks.

Players can use a Tranquilizer Dart to permanently knock out a target, either by sneaking up to them from the front or by hopping on the enemy's back. The dart can also be used as an escape item when grabbed by a Sleeper or Lucid. If the player has the Crossbow Hero Item, they can shoot a tranquilizer dart from a safe distance with the same effect. A player can only carry a max of 3 Tranquilizer Darts, but can carry an additional dart if they have the Lucky Loot Minor Power when looting with 2 darts in their inventory (picking up 2, making the total max darts a player can carry 4). Players with a Crossbow spawn with one dart in their inventory.

When a Stalker uses a dart, The Blackout Club member attacked will be stunned and lose all stamina, giving the Stalker a chance to run and escape.