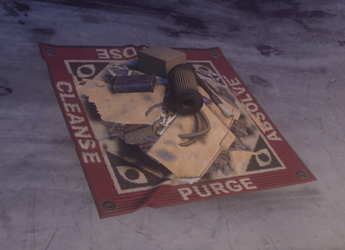 A Trash Pile in the Maze

Trash Piles in the Maze and Trash Bags on the surface of Redacre, are special items found during missions. Trash Bags on the surface consist of blue bags typically by the street curbs and in the backyards. In the Maze, the trash piles consist of small items like some rope, manila folders, wet/dry vacuum filter, a paintbrush, a small box, and other rubbish underneath. These piles are scattered around in the maze, sitting on small mats with the words "CLEANS PURGE ABSOLVE DISPOSE" around the perimeter (the same text found on the Contraband Lockers) with four small eyes (like the one used in the HUD) in each corner.