From The Blackout Club Wiki
Jump to: navigation, search
"We came, we saw, we...still need a catchphrase!"
Wardrobe has not been given an official name. This name is conjectural and will be used until an official name is provided. 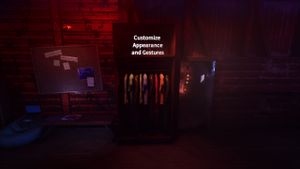 The Wardrobe in the Hideout.

The Wardrobe is a gameplay element in The Blackout Club (game).

The Wardrobe is a gameplay element which allows players to customize their kid, mostly clothing, hair color, and Hideout customization. It consists of a closet with clothes hanging with a mirror next to it, allowing players to see the reflection of their characters. It is located right next to the Leaderboard and the Blackout Club notice board. 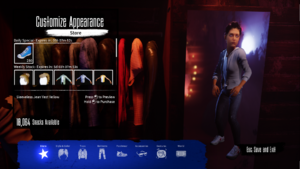 The Store seen from within the Wardrobe.

Interacting with the wardrobe will take the player to a menu where they will be able to access different categories and purchase different cosmetic items. There are eight categories inside the wardrobe: the Store, Style & Color, Tops, Bottoms, Footwear, Accessories, Gestures, and World. Players will keep all cosmetic items they have obtained even after Sacrificing. These items have no noticeable affect on gameplay, with the exception of fluorescent clothing items (e.g. the Halo, Chosen Shirt, or Cosmic Items) being visible to Stalkers.

As long as the party has not departed on the mission, all players in a session have access to to the wardrobe.

The Store has three categories in it: the Daily Special, the Weekly Stock, and Premium Content. The Daily Special resets every 24 hours and contains a random cosmetic item of any category that will change each day. The Weekly Stock resets weekly on Thursday (real world time) and has a stock of 21 items of all categories. Clicking on the third category, Premium Content will lead to the The Blackout Club purchasable DLCs (downloadable content) on the Steam Store page.

There are certain exclusive cosmetic items that can only be obtained in special situations or on special occasions. These specific items cannot be purchased through the store.

Players can customize the appearance of their character by purchasing cosmetic items and then navigating to the other customization tabs and choosing the items of their choice. There are five categories that relate to the character's appearance: Style & Color, Tops, Bottoms, Footwear, and Accessories, all of which are represented by their respective icons on the navigation bar located at the bottom of the menu. At the first launch of the game, the player will be able to select gender, voice, and eye color, which cannot be modified. If the player wishes to modify those attributes, they must sacrifice their character and start again.

Style & Color refers to the hairstyle and color of the character's hair. Tops refers to shirts, hoodies, vests, and other upper body clothing. Bottoms refers to pants and footwear and shoes. Accessories are the most varied category, ranging from glasses, headphones, bandannas, and masks. Players can only wear one cosmetic item of each category at a time.

Gestures are emotes that the player's character can equip and use for missions. Gestures can be used anywhere in-game and serve no significant purpose other than to interact with other players. Players can equip eight gestures at once using the Wardrobe, assigning gestures to a slot on the Gesture Wheel.

will bring up the Gesture Wheel where players can select which gesture to use.

The World category allows players to customize the Hideout with extra items and posters. They can be purchased in the store and then equipped on the respective World tab on the navigation bar. Players cannot interact with the items. All of the items have a preset location and cannot be moved.

Click on an item category or select from the links below to see the collection of items in that category including items from DLCs and special in-game experiences.